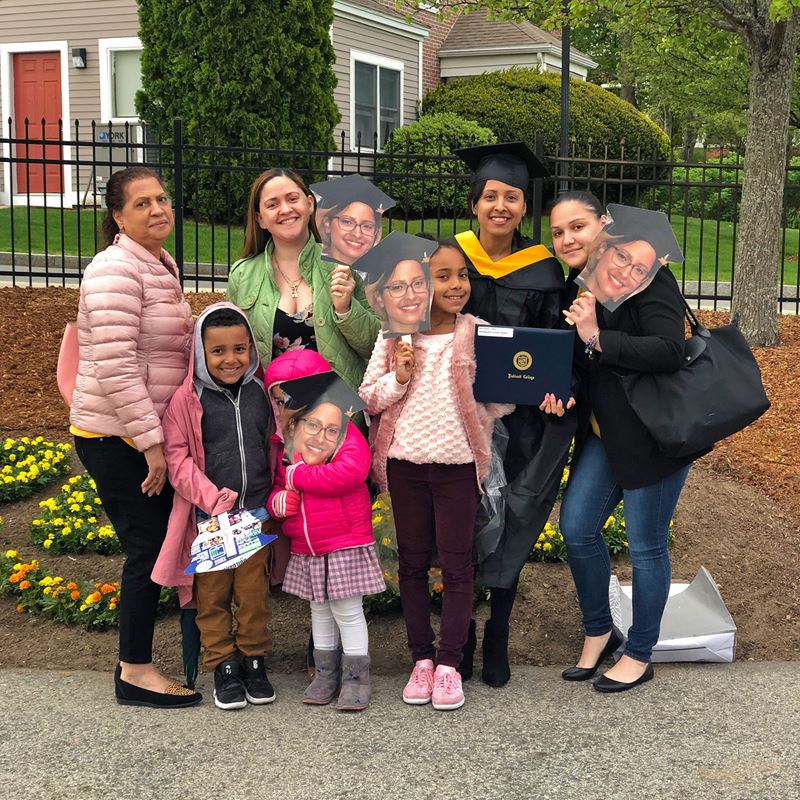 "The whole experience has been life-changing for me. One of my goals was to finish college, and it was really difficult. I thought, ‘I’ll never do this,’ but things lined up in the best way possible. If I had a question, there was always someone to help me—the professors really cared. I learned a ton. As soon as I finished my associate degree, I was able to switch jobs and earn $20,000 more.”"

Rosa Nin was awarded not one, but two academic degrees between 2018 and 2019. Following high school, Nin enrolled in a local state college, but was soon overwhelmed by mounting student loans and rigid schedules that did not support her personal needs. Although she sought assistance from the college’s faculty and staff, she felt pushed aside and treated more like a number than an individual. Before the completion of her first semester, she withdrew from school. She later enrolled in a different local college, but was faced with the same challenges. After two unsuccessful attempts, Nin decided to leave school and join the workforce.

Nin spent the next few years working for a non-profit where her hard work was recognized by her supervisor who encouraged Nin to reach her full potential. When an opportunity for a promotion arose, her supervisor knew that Nin would make an excellent candidate, but she did not meet the academic qualifications required by the role. Already struggling to provide for her family, she was faced with the reality that she might have reached her professional cap.  Nin was disheartened and struggling to provide for her children on her current salary. Rather than let this experience defeat her, she was inspired to resume her undergraduate courses and work toward the goals she had previously set for herself.

As luck would have it, Nin came across an article about the Jeremiah Program, which provides empowerment, life skills training, and individual coaching to women and children. Nin reached out to the Jeremiah Program and was directed to its educational partner, Endicott College Boston. Endicott’s staff encouraged her to register with the Single Parent Program—a non-residential model based out of the Boston campus, offering increased services to single parents striving toward academic success. Nin joined the Endicott community and enrolled in undergraduate courses—for the third time.

As the saying goes, “third time’s a charm,” and in Nin’s case, it truly was. With the hands-on guidance she received from the faculty and staff at Endicott Boston, Nin was able to complete both her associate and bachelor’s degrees. At her previous institutions, Nin struggled without much assistance, but Endicott Boston stood out against the rest. Nin reflects on the faculty and staff as, “Caring. First and foremost caring: about me and my family. Caring that I finished and that I learned. It was a different experience than other schools. At Endicott, the counselors were great, they helped me navigate the system, which was really difficult for me before.” In fact, it was Nin’s academic advisor who suggested she split her degree and earn both an associate and bachelor’s degree in business management. This decision immediately increased Nin’s confidence when pursuing new professional opportunities.

As a mother working full-time, the flexibility and support Nin received through the Single Parent Program was instrumental to her success. A major benefit of the program is access to its partner institutions such as Sitters Without Borders, a Boston-based, non-profit organization that offers free babysitting services to low-income parents pursuing a degree in higher education. Nin noted that if Endicott didn’t offer a service, its counselors would connect you with someone in another program that could help. Having free child care made it possible for her to stay on-track with her evening courses, which had been challenging in the past. Nin’s advisor worked to keep her on schedule as well, reaching out to her each step of the way.

Now with two degrees, Nin has advanced her professional career and is enjoying a role that provides her with flexibility, better quality of life, and the ability to invest in her children’s future.

She says, "The whole experience has been life changing for me. One of my goals was to finish college, and it was really difficult. I thought, ‘I’ll never do this,’ but things lined up in the best way possible. If I had a question, there was always someone to help me—the professors really cared. As soon as I finished my associate degree, I was able to switch jobs and earn $20,000 more.”

Nin is now confidently pursuing new opportunities for professional growth and is actually turning down job offers. Her journey isn’t over, but she is looking forward to what her future holds.

Nin enjoyed the convenience of Endicott’s Boston campus, connecting with her fellow students, and learning from professors who cared about her success. She is still in contact with the Endicott community and plans to join Endicott's Virtual Book Club for Alumni as a fun way to stay engaged.